Skip to content
i’m a few weeks late with this – oops
the biggest news between months 1 & 2 was that we all survived burt’s 3 week tour! in the time he was in canada, oliver started smiling, and even bigger – sleeping mostly through the night! everything i’ve read says that we’re part of the lucky few and we’re not taking it for granted!
he’s really found his voice in the last month too. any time he’s on the changing table he lets loose and lets us know how he’s feeling. i can’t get over how happy and joyful he is.
we had the dreaded 2 month dr’s visit last week and found out what kind of growing he’s been up to. he now weighs 11 lbs and is 22 inches long – which makes sense; he’s almost outgrown all of his newborn clothes 😦 I can’t believe i need to start packing those away already.
poor guy got 6, yes 6 vaccines (5 shots and one oral) and it was a rough week on all of us because of it. that is so much for a tiny little body to handle at once, but we’re slowly getting back on schedule and he’s finally back to his silly talking, singing self. 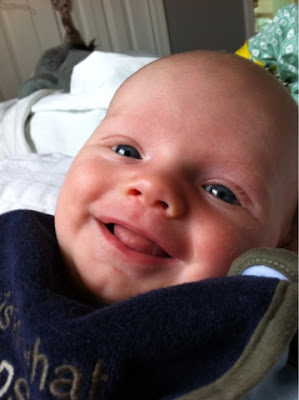 This past week, he’s made the awesome new discovery of his hands. its so awesome to watch him process and learn how to use them – he’s a pro drooler and is great at getting anything close to those hands in his mouth – we just started grasping some toys this week too so he’s starting to make the connection. play time on his activity mat is starting to be a lot more fun! 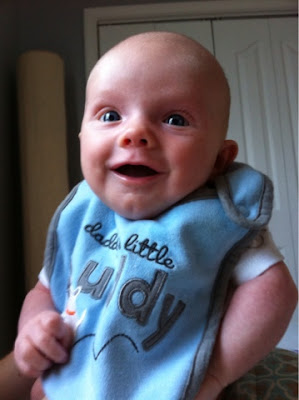 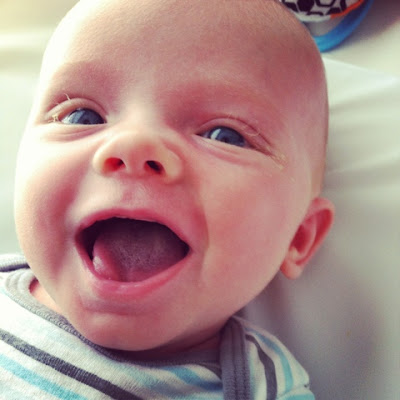 everyone else is happy and (mostly) healthy; i’m fighting a bit of a sinus infection that showed its ugly face during the day yesterday but other than that, life is awesome! we’re lucky enough that burt has a great job so i made it official this month that i am not returning to work for the time being…i couldn’t imagine missing out on the daily discoveries he’s making.
i’m slowly settling into my new role as a (gulp) stay at home mom, but i’m making it mine. i was able to do a ton of yard work last week (which i think is where this sinus infection came from) and the backyard isn’t as much as a nightmare as it has been in the past. we planted some stuff over the weekend and it looks like our back patio may actually be how we’ve always wanted it now.
the babbling boy next to me is telling me he’s getting hungry – until next time.
(did i really sign off like that? ugh).